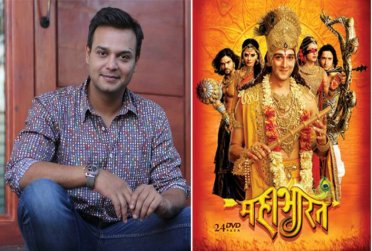 Recently we got in touch with the producer of the show, Sidharth Kumar Tewary, and he shared some interesting insights about the making of the show. Speaking about the making Mahabharat, Sidharth shared, “When Star Plus asked me to make the show, I had no clue whether I’d be able to make the show or not. Uday Shankar, CEO of Star Plus asked me to make Mahabharat in a way no one had made it. He was instrumental in upping the scale of the show and that was a big challenge for us.The idea was to put the show on air in eight or nine months, but when we actually started working on it, we realized it cannot happen overnight. In fact, it took us five years to make the show.”

Further talking about Mahabharat, Sidharth added, “A lot of people told me you should not be making it, you are a very young company. The show went through a lot of troubles. But somehow, when we started making the show, it all fell into place despite a lot of issues. I was determined to make the show in a way no one had made it in the country.”

When asked to share some lesser known facts about Mahabharat, the producer quipped, “Everything that you can imagine to go wrong, went wrong with the series. Before 2009-2013, everything went wrong, because we were constantly running against the time. There was a time the broadcasters refused to air the series because of lots of issues that were arising, but I believed in the show and my vision. Every small little detail that you notice in the series now, has gone through it’s own journey.”